This journal, previously located at DLMS 101, was part of the personal library of Sir William Dixson which was bequeathed to the State Library of New South Wales in 1952. Dixson's bequest was formally handed over when the Dixson Library was opened in 1959. Sir William Dixson had acquired the journal from the Honourable Edward Stanhope who had purchased it when it was offered by Sotheby, Wilkinson and Hodge at auction in London on 17 June 1880.

Following the withdrawal of Joseph Banks' party from the second Pacific voyage under the command of James Cook, Banks undertook little other travel outside England. On 12 February 1773, however, he did set out on a visit to Holland in company with Charles Greville, Captain John Bentinck and Bentinck's son William. They arrived in The Hague the following evening where they were met by their host Count William Bentinck. From The Hague the party travelled to Leiden and visited the university where they were shown the zoological collection, the herbarium and the botanical garden. A trip to Haarlem followed before travelling to Amsterdam where Banks spent time at the university viewing botanical collections and drawings. In the city of Utrecht, Banks was guided through the university's botanic garden. In Rotterdam, he and Greville were guests of the Rotterdam Society for Literature. Finishing their journey in and around The Hague, Banks and his friends arrived back in London on 22 March.Subjects: Allemand, Jean Nicolas, 1713-1787 Bentinck, William, Count of Rhoon and Pendrecht, 1704-1774 Bentinck, John Albert, 1737-1775 Bentinck, William Boddaert, Pieter, 1730-ca 1796 Botanical gardens - The Netherlands Burmann, Nicholas Laurens, 1734-1793 Greville, Charles Francis, 1749-1809 Hermann, Paul, 1646-1695 Leiden University (The Netherlands) Loten, John Gideon, 1710-1789 Lyonet, Pierre, 1707-1789 Netherlands, The Noseman, Mr Oldenland, Hendrik Bernard Piso, Guillaume, fl. 1640-1660 Polders Plants - Collection and preservation Rainville, Frederic Reclamation of Land (The Netherlands) Reynst, Admiral Royen, David van, d. 1799 Swenkins, Professor William V, Prince of Orange, 1748-1806 Yorke, James, Sir 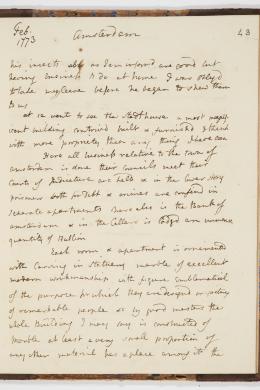 Banks Document 02.01
Series 02: Journal of a tour in Holland, 12 Februa
0% Available for transcription